Chameleons are solitary reptiles commonly found in tropic areas, known for their ability to climb walls and possibly blend into environments relative to their temperatures and mood.

For people interested in owning a pet chameleon, substrates will be the foundation the rest of their habitat is built from, be it in a vivarium or similar enclosures. Different substrates strive to mimic their natural environments, but some may do more harm than good.

Choosing the best substrate for chameleons remains a simple task. As long as you’re aware of the things you should consider while picking out a particular habitat bedding, it’ll be a piece of cake.

The wrong substrate can prompt as many newfound problems as the best substrate for chameleons could solve. Chameleons require material without rough or jagged edges, less they unintentionally consume it and suffer from impaction.

Humidity becomes another beam needing balance: too much promotes bacteria, too little ruins their skin. The amount of humidity a chameleon needs depends on the species. Most tropic plants and animals need a relative humidity level of at least 50% to reflect their natural environments.

Some species, such as the panther chameleon, are more comfortable at humidity levels leaning closer to 60 or 70%. Figuring out humidity levels in an enclosure doesn’t have to be difficult either.

Hygrometers are a measuring tool made to detect humidity levels of a given space. Keeping one handy while determining which substrate your chameleon would prefer would prove useful.

Edema, parasitic infections, and stomatitis can result from poor habitat management, along with difficulties laying eggs for female chameleons. Edema is a disease characterized by fluid build-up leading to swelling underneath the skin, with causes that such as excess vitamin intake or high humidity levels.

Chameleon mouth disease, or stomatitis, happens when an infection reaches a chameleon’s mouth, esophagus, pharynx, or tongue. Symptoms typically involve brownish gum lines as evidence. Not all causes of these ailments can be influenced by the substrate chosen for the chameleon’s enclosure, but humidity and hygiene can.

Parasites originate from unhygienic habitats. Some carriers include bacteria, worms, and mites. Substrates play a large part in determining how hygienic an enclosure can potentially be. Beddings that are difficult to clean may leave you less inclined to frequently and thoroughly clean droppings out of them, even if they have other benefits.

Which Chameleon Substrate Is Right for Your Pet?

Substrates that tend to keep moisture under control include moss and coconut-based substrates. There are two types of coconut substrates commonly used, both derived from fibers within the coconut’s husks.

Coconut husk substrates are sold as a form of makeshift dirt called eco-earth or in its denser variant, aptly called coconut husk brick. Bricks swell when given moisture but provide the same overall backdrop for a chameleon’s enclosure. They’re good at holding moisture and the dirt-like material offers a place for female chameleons to lay eggs.

The difference between the two versions is that coconut husk bricks aren’t ideal planting material. Eco-earth isn’t compact but can act as the soil for plants to grow from. In terms of substrate, moss is a soggier relative of eco-earth. It’s similarly reminiscent of the tropical environments many chameleons are native to, but also requires following stricter cleaning schedules due to its ability to retain bacteria and to develop mold.

Certain substrates that may prove beneficial for other reptiles don’t bode well for chameleons. Sand is one of them. The majority of chameleons don’t normally live over sandy terrain and for good reason. To eat, chameleons stretch their tongues out to catch unassuming prey. In the process of latching onto unsuspecting insects, they might ingest nearby dust or pieces of substrate.

Repetitively consuming sand or dust might eventually kill the chameleon via constipation. Signs of chameleon constipation include bloating, straining, hind leg paralysis, and refusing to eat. Besides parasites, a potential source of the problem is the substrate in their enclosure.

Any substrate they can accidentally consume has the potential of causing impaction. This doesn’t mean an aversion to substrates at all costs, but merely mindful decision-making in finding the best substrate for chameleons. Some sand substrates have calcium in them to partially alleviate the problem but the potential for impaction is still there. 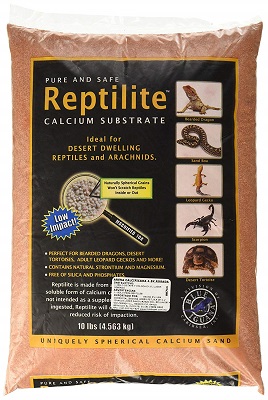 Ideal for: True chameleons and other reptiles that come from arid or semi-arid environments

This sand substrate for chameleons was one of the safest we could find. It is 100% made of the most soluble form of calcium carbonate, also known aragonite, which means tat is edible and digestible without causing your pet constipation. It is enriched with magnesium and strontium and comes in a beautiful desert rose color.

Ideal for: Chameleons from tropical and mountain rain forests

Green sphagnum moss is a great chameleon substrate for multiple reasons. It is low-maintenance, good-looking and perfectly mimics some chameleon species’ natural environment. Also, it is biodegradable, 100% organic and contains no toxic additives or dyes.

It can be used as it is or in conjunction with a different type of chameleon substrate, such as a bark blend. 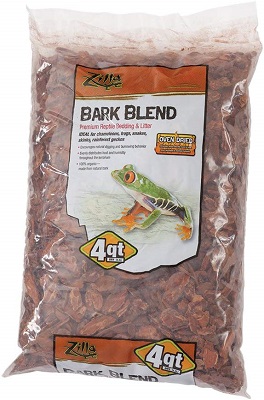 This is a universal substrate made of organic fir bark. It easily accommodates reptiles from nearly all environments and climates including the arid and semi-arid areas and the humid northern forests. It is made only from organic fir bark with no nasty additives or dyes included. This is a quality chameleon substrate as the bag contains no mites, pests, or mold. 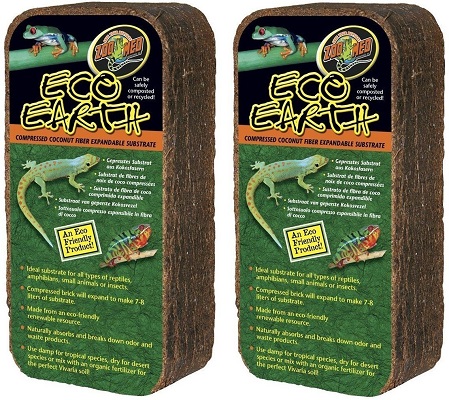 Ideal for: All types of chameleons

This might be the best chameleon substrate option on our list. It is very versatile as it accommodates both tropical and desert species and it is 100% natural easy to set up. For desert species use the bricks dry, while for tropical species use it damp. The bricks are made of compressed coconut fiber that expands to cover up to 8 liters worth of terrarium substrate.

This substrate absorbs nasty odors and extra moisture and can be easily composted or recycled. A win-win for both your pet and the environment.

Unfortunately, the ultimate answer depends on the chameleon, its owner, and the resources available among them both. There simply isn’t a specific one-size-fits-all answer. If you don’t want to clean frequently, paper towels are a safe option.

Though that’s not entirely true for female chameleons since they need somewhere to lay eggs, which implies that eco-earth, sand, or moss may be the best chameleon substrate. Substances like eco-earth and moss appear viable until you have to clean them, insects dig their way in and proliferate as unforeseen residents, or they begin harboring mold and bacteria.

These are partially the best not because they’re the best specifically for the chameleon, but because their owner will have less trouble maintaining humidity levels and keeping the place clean.

The TPR Team invites you to read informative pieces and specialized opinions from experts in all things dogs, cats, birds, fish, hamsters, rabbits, and all things pet, in general.