Circus Animal Cruelty at its Worst? Tiger Collapses in Seizures during Show 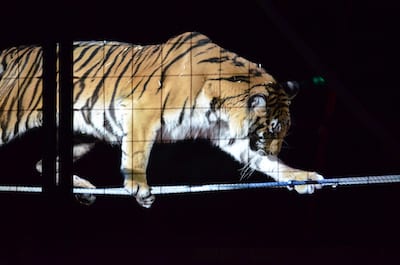 Circus-goers in Magnitogorsk, Russia had a frightening experience last Sunday, when a circus tiger collapsed mid-show, struck by seizures. No matter how people feel about the circus in general, this time the public shared a common reaction: outrage in the face of circus animal cruelty and complete lack of respect towards life itself.

The tiger performance went horribly wrong, according to witnesses, as the tigress Zena collapsed in convulsions mere moments after jumping through rings of fire. The two tiger handlers, brother and sister Artur and Karina Bagdasarov took a decision that enraged the public even more. Artur jumped at the fallen animal, dragged her out by her tail and tried to revive her by throwing buckets of water over her head.

As anyone can easily imagine, such shocking behavior immediately gained unwanted attention from the media, strong accusations of animal cruelty pouring over the two circus performers.

The six-year-old big cat Zena was carrying out a circus number in the ring together with other tigers. The Bagdasarovs motivated their actions saying that they prevented the other tigers from attacking the vulnerable Zena, thus stopping a bloodbath among the feral felines.

Siberian big cats (Zena included) do not have the reputation of being the most gentle and pacifist mammals in the world. However, the horrified families attending the circus show deemed the brothers’ actions unforgivable.

Called – and maybe for the right reasons – sadists, the two performers denied other allegations regarding the use of a stun gun on the tigress or abusing the circus tiger.

The online reactions after the fact did not take long to appear: a public outcry against the handlers accompanied a freshly regained rage against circus practices and using animals for show. Online comments have accused the famous Russian troupe of using a stun gun on the tigress, but to this day, they deny the allegations.

What they do not deny, however, is the fact that Zena collapsed in convulsions, although they insist it was “for unknown reasons.” Now they are talking about an epileptic fit, though many things remain to unravel.

Circus spectators clapped when the tigress finally came to her senses and walked on her own feet, but the public and online commentators still think the matter requires further investigations.

The two handlers offered a series of interviews and statements to the press, all pressing on the same idea: taking the tiger away from the other animals prevented a bloody catfight in the ring.

However, what unsettled the public was not the taking per se, but the method of removing the sick animal from its peers.

You should watch the video above with a strong heart, as the images are heartbreaking and shocking, to say the least.

Whether it was an act of risk minimization or an example of circus animal cruelty, nobody can know for sure. What we know is that Zena has a condition, one that is dangerous for herself and others, and somebody should do something about it.

Olivia is at her happiest when she is cuddling (with their acceptance, of course) her two cats: Max and Moxie (totally intended). When she is not spending time with her beloved felines, Olivia is busy writing about the toys they play with and the things they use. Proud Cat Lady in the making!