35 Interesting and Cool Facts About Rabbits 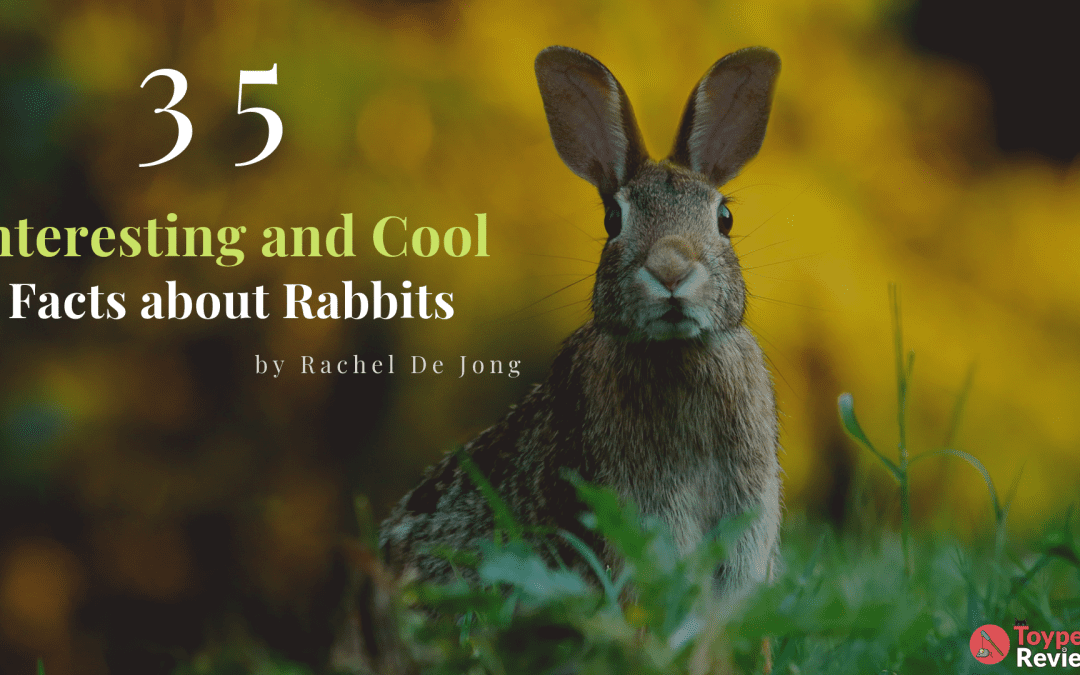 Rabbits are amazing creatures and I am sure there are many interesting facts about rabbits you never knew.

So I am going to try and cover as many facts about rabbits as I can.

#1. The European rabbit originally comes from the Mediterranean area.

Its origins can be traced back to Spain, Portugal, and also North Africa.

The Romans domesticated them around 300 BC and they were first introduced to Britain by the Romans some 2000 years ago.

They were used for food and were kept in walled enclosures with deep foundations to stop them from escaping.

When the Romans left Britannia, they most likely died out.

Rabbits were later reintroduced by the Normans for the same reason and were also kept in enclosures.

Still, some are believed to have escaped into the wild and to have established wild colonies.

#2. In North America, there are 8 species of Cottontail rabbits.

There are also 7 species of Hares.

They are actually a species of hare.

#4. Domestic rabbits are direct descendants of the European wild rabbits.

Their genome is very different too. They can’t breed together and produce young ones.

#6. European rabbits are susceptible to the viruses of Myxomatosis, RVHD type 1 and type 2. Cottontails aren’t.

Cottontails may possibly catch or carry these viruses, but they don’t suffer any ill effects, unlike the European and domestic rabbit.

#7. Rabbits were originally classified as rodents.

That is, until 1912 when then they were reclassified as their own group Lagomorpha along with Hares and Pikas.

Hares are born with their fur and their eyes open.

Compare this to a human’s, whose heart beats around 60 to 70 a minute.

#11. A rabbit’s whiskers are as long as their body is wide.

Except for Rex rabbits. They don’t really have whiskers except for the odd short curly one.

As you can see below on Speedy, he has very short or no whiskers at all because he is a Rex rabbit.

Compare him to my previous rabbit, Thumper, who had long whiskers.

A group of Burrows is called a warren.

Cottontails live in depressions, in long grass, and shrubland. They sometimes use the abandoned burrows of other animals.

#13. A group of rabbits is called a Fluffle or a herd, but most people say fluffle.

A rabbit can distinguish 2 different sounds from 2 different directions because each ear can move independently and can rotate up to 270 degrees.

Their eras are also part of a rabbit’s cooling system. They help them cool down in hot weather by dilating the blood vessels in the ear to help the heat escape the body.

They have just a blind spot in front of their nose.

Rabbits are also farsighted, so they rely on their sense of smell for close up stuff.

#16. Many people believe rabbits are nocturnal, but that couldn’t be further from the truth.

Rabbits are actually crepuscular, which means they are most active in low lighting like at dusk or at dawn.

This is because their eyes are designed to work best in these light conditions.

#17. Rabbits communicate with each other through body language and scent.

They can subtly change the expressions on their face by manipulating their facial muscles. They can also modify the angle and position of their ears.

Rabbits also change the body stance to communicate things like whether they are worried, on alert, or happy and relaxed.

#18. In France, rabbits are banned from French-owned ships and ferries.

This is because of a superstition that claims that rabbits at sea on a ship bring bad luck.

In the 17th century, the French Navy would have live rabbits on board their ships so that they would have fresh meat.

That is until one ship sank carrying a lot of rabbits. Allegedly, the sailors believed the rabbits chewed through the hull and sank the ship.

From that moment on, the French would never again carry rabbits because they thought they brought bad luck.

Brittany Ferries still ban rabbits on their vessels to this day.

#19. Rabbits express joy by running about doing skips, hops, and leaps in the air.

These are known as Binky’s.

They don’t have the muscles in the stomachs to do it.

Their white cottontail allows for predators to concentrate on the movement of the tail so when they run they suddenly change direction.

They usually go for a zigzag pattern which makes the predator lose sight of the rabbit for a few seconds, giving it a chance to escape.

#23. Rabbits share similarities to Horses and Donkeys and other Equines.

They are similar in the sense that their eyes have sort of the same shape, construction, and the same field of view.

Their ears work in the same way too.

Their teeth constantly grow and they have the same diet.

So is a horse an overgrown rabbit or a rabbit an under grown horse? Hmmm….

Yes, they do, and they have 2 types of poop. They either do a soft grape-like group of poops called cecotropes (also known as cecals).

These are the ones they eat so that they can fully digest the nutrients and friendly bacteria contained in them.

They also do poops that basically look like little raisins… They also drop around 300 poops a day!

When a rabbit is relaxed, happy, and content they do a little noise called a tooth pur where they gently grind their teeth.

How’s this for some cute facts about rabbits?

When they do this, they sleep so soundly that they often frighten their owners into thinking they are dead.

Owners have to check to see if their rabbits are breathing. Just like Speedy is here…

#26. Rabbits growl when they are annoyed and angry, just like a dog.

Wild rabbits only live 1 to 2 years, although a very clever one can live longer.

#28. Rabbits can only breathe through their noses and they have about a million scent cells.

This means that their sense of smell is far more developed and superior to our own.

This allows them to not only tell the difference between sweet, salty, sour and bitter foods, but they can also tell which plants are poisonous.

#30. Rabbits can sleep with their eyes open.

They do this so that they can see when a predator is trying to sneak up on them.

So while you might think your rabbit is awake, it could actually be sleeping as well as spying on you!

Still, they can only sustain their maximum speeds for short periods of time.

Speedy, as a young rabbit, was probably the fastest rabbit I have ever had. He would run so fast that you could blink and miss him.

All you would hear was the patter of his feet as he went past, like in the video link below:

#32. The largest breed of domestic rabbit is the German Giant and the smallest breed is the Netherland dwarf.

They spend enormous amounts of time on grooming themselves and each other (if they live with a bondmate or in a group).

Which means they don’t need us to bathe them (much like cats).

There are 4 main toes on their feet and a dew claw toe on the side of the foot.

#35. Their feet are the only spot where rabbits have sweat glands.

This is it, this has been my list of facts about rabbits that you might not have know, combined with some that you probably did.

Do YOU know of any other interesting or cool facts about rabbits?

Then leave a comment and tell us all about the facts about rabbits that you know!

Recommended: Get the best toys for your rabbit, and all the pens and cages they might need in their new home!

Rachel is the Mum of Speedy, a male Himalayan Rex Rabbit who is over 7 years old. She started his blog to help people find out more about rabbits and other small house pets.

Anything from how to welcome them into your home to how to feed and hold them correctly, Rachel is the one to ask!